How to Stop Loving Something Ugly

Our Lord, we have certainly wronged our own selves. If you forgive us not and do not show mercy toward us, we shall certainly be of those who are lost. (Qur’an 7:23)

Empowerment is something desired by all who feel oppressed. If there is an overpowering force that is out to do us harm, we wish more than anything to overcome it. Contemporary common sense however teaches that there is one compelling force that we simply cannot overcome, and that is our own self (nafs). Desires, proclivities, and inclinations toward unwholesome, unseemly things are seen to be, at most, unfortunate. With mottos like “Just Do It!” having become part of the cultural fabric of contemporary society, it is easy to see why even those who wish to stop loving something ugly view the task as requiring Herculean effort. 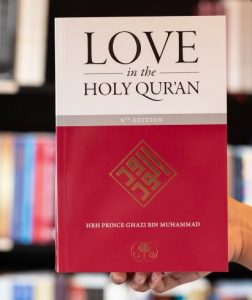 In the midst of such a depressing fatalism of the self, the empowering teachings of the Qur’an and Prophetic sunnah are reason for the believer to rejoice. No doubt, it is not an easy job to curb one’s love for negative things, be it for an old flame post-marriage or for a sorry addiction. But it can be done, and our religion offers us a practical and spiritually potent plan for how to do so. Using Qur’anic passages in a meaningful and motivating way, the following excerpt from Love in the Holy Qur’an offers three key practices for how we can train our hearts to stop loving what is not good for itself.1 The Qur’anic verses cited deserve special attention, as they have a power all their own and an ability to soften hearts and inspire right action.

How to Control One’s Love2

If love increases as a person’s soul—with all its constituent parts and faculties— inclines towards the beloved, then how can anyone deliberately and consciously cultivate a specific love and diminish another? In other words, how can a person choose and control what to love and what not to love? How can the will alone control the inclination of all the other faculties including the ego itself? Someone might want to refrain from loving something in which there is no good or no hope, and not know how to do so. Conversely, someone might want to love something wherein there is a great deal of good, but might not incline to it naturally. God says:

In a sense, the whole spiritual and moral life is about controlling what one loves and what one does not love, and so this question can be tremendously complex. Nevertheless, in the Holy Qur’an God speaks of particular keys that show how to more easily strengthen and weaken love as such.

Actually, strengthening a beneficial love for something good occurs naturally by means of faith and righteous deeds in general. As previously cited, God says: Truly those who believe and perform righteous deeds—for them the Compassionate One shall appoint love. (Maryam, 19:96)

This is thus very simple. The key to strengthening a beneficial love for something that is good is to perform righteous deeds and hence to behave virtuously.3 Virtue (or goodness—ihsan) is truly its own reward. God says: Is the reward of goodness (ihsan) anything but goodness (ihsan)? (Al-Rahman, 55:60)

On the other hand, weakening a love for something negative is not so easy. It is, nevertheless, possible with God’s help. God says:

Will you bid others to piety and forget yourselves, while you recite the Book? Do you not understand? / Seek help in patience and prayer. For it is indeed hard, except to the humble (al-khashi’in), / who reckon that they shall meet their Lord, and that to Him they are returning. (Al-Baqarah, 2:44–46)

Thus internal change is hard, but not impossible. It requires a priori some faith in God (who reckon that they shall meet their Lord), hope in Him and fear of Him (and that to Him they are returning). But in addition to faith, hope and fear … internal change then has need of three key virtues or practices, namely: (1) patience; (2) humility; (3) prayer and remembrance of God.

Self-monitoring means that people must control what they let themselves indulge in. God says:

Like those before you, who were far mightier than you, and more abundant in wealth and children. They enjoyed their share. So you enjoy your share, just as those before you enjoyed their share, and you indulge [in vain talk], just as they indulged [in vain talk]. Those, their works have become invalid in this world and in the Hereafter; and those, they indeed are the losers. (Al- Tawbah, 9:69)  `Woe then on that day to the deniers, / those who indulge in vain talk. (Al-Tur, 52:11–12)

Thus if a person’s soul—with all its constituent parts and faculties—indulges in, and becomes attached to, a ‘negative’ object of love, then (if they truly wish to stop that harmful love) they must stop letting themselves indulge in it, and a fortiori stop thinking about it.

In order to do this they have to think about something else; or rather they have to pray and think of God (‘key’ no. 3). In particular, they have to remember God. God says:

Is it not time for those who believe that their hearts should be humbled to the remembrance of God and [to] what has been revealed of the truth, and that they should not be like those who were given the Scripture before? For the stretch of time was too long for them and so their hearts became hardened, and many of them are immoral. (Al-Hadid, 57:16) `Recite what has been revealed to you of the Book, and maintain prayer; truly prayer prevents against lewd acts and indecency. And the remembrance of God is surely greater, and God knows what you do. (Al-‘Ankabut, 29:45) `And those who disbelieve say, ‘Why has not some sign not been sent down upon him from his Lord?’ Say: ‘Indeed God sends astray whomever He will, and He guides to Him those who turn in repentance’; / those who believe and whose hearts are reassured by God’s remembrance. verily by God’s remembrance are hearts made serene. (Al-Ra’d, 13:27–28)

However, even though they start to remember God more, temptation and Satan’s voice (inside themselves) will still assail them. God says:

‘And tempt whomever of them you can with your voice, and rally against them your cavalry and your infantry, and share with them in wealth, and children, and make promises to them’. And Satan promises them nothing but delusion. / ‘Truly as for My servants, you shall have no warrant’. And Your Lord suffices as a guardian. (Al-Isra’, 17:64–65)  `God has cursed him. And he said, ‘Assuredly I will take to myself an appointed portion of Your servants. And I will surely lead them astray, and surely I will fill them with desires; and surely I will command them and they will cut up the cattle’s ears. And surely I will command them and they will change God’s creation’. / And whoever takes Satan for a patron, instead of God, has surely suffered a manifest loss. He promises them, and fills them with desires; but what Satan promises them is only delusion. (Al-Nisa’, 4:118–120)

The evil voice of the ‘slinking (inner) whisperer’ ‘who whispers in the breasts of mankind’ (Al-Nas, 114:5) is a powerful obstacle to the spiritual life. It can derail people’s best efforts, if they give in to it. Thus the virtue of patience (‘key’ no. 1) is essential. Without patience and perseverance (the term ‘sabr’ covers both concepts) in prayer and in the remembrance of God, there is no way—psychologically and spiritually speaking—to escape harmful and negative thoughts and desires. Indeed, human beings are inevitably caught internally between two alternatives: a ‘demonic companion’ (qarin), or the remembrance of God (Allah), who is the Most Compassionate (Al-Rahman), the Most Merci- ful (Al-Rahim). God says: And whoever withdraws from the Remembrance of the Compassionate One, We assign for him a devil (qarin) and he becomes his companion. (Al-Zukhruf, 43:36)

In order to extricate oneself from a negative or evil love, one must simply keep remembering God and invoking Him as much and as often as possible—if not constantly—and simply ignore temptations or negative thoughts. As regards ignoring temptations and negative thoughts, God says:

… Say: ‘God’, then leave them to play in their vain discourse. (Al-An’am, 6:91) `Truly the God-fearing, when a visitation from Satan touches them, they remember, and then see clearly. (Al-A’raf, 7:201)  `O you who believe, do not let your possessions and your children divert you from the remembrance of God; for whoever does that—it is they who are the losers. / And expend of that with which We have provided you before death comes to any of you, whereat he will say, ‘My Lord, if only You would reprieve me for a short time so that I might give charity and become one of the righteous!’ (Al-Munafiqun, 63:9–10) `But whoever disregards My remembrance, his shall be a straitened life. And on the Day of Resurrection We shall bring him to the assembly, blind. (Ta Ha, 20:124)

And as regards remembering God and invoking Him as much and as often as possible, God says:

O you who believe! Remember God with much remembrance. / And glorify Him morning and evening. (Al-Ahzab, 33:41–42) `And never say regarding something, ‘I will indeed do that tomorrow’, / without [adding], ‘If God will’. And remember your Lord if you forget. And say, ‘May be my Lord will guide me to [something] closer [in time] than this by way of guidance. (Al-Kahf, 18:23–24) `Go, you and your brother with My signs, and do not flag in remembrance of Me. (Ta Ha, 20:42)  `When you have performed the prayer, remember God, standing and sitting and on your sides. Then, when you are reassured, observe the prayer, surely the prayer is for believers a prescription at specific times. (Al-Nisa’, 4:103)  ` Surely in the creation of the heavens and the earth, and in the alternation of night and day, there are signs for those who have cores. / Those who remember God, standing and sitting and on their sides, and contemplate the creation of the heavens and the earth: ‘Our Lord, You have not created this in vain. Glory be to You! So guard us against the chastisement of the Fire. (Aal ‘Imran, 3:190–191)   `And mention the Name of your Lord at dawn and with the declining of the sun. (Al-Insan, 76:25) `And mention the Name of your Lord, and devote yourself [exclusively] to Him with complete devotion. (Al-Muzzammil, 73:8)  `And restrain yourself along with those who call upon their Lord at morning and evening, desiring His Countenance; and do not let your eyes overlook them desiring the glitter of the life of this world. And do not obey him whose heart We have made oblivious to Our remembrance, and who follows his own whim, and whose conduct is [mere] prodigality. (Al-Kahf, 18:28)

Through constant remembrance of God—with humility, and with patience and perseverance—it eventually becomes possible to overcome vain caprice (hawa), restrain lusts, false loves and worldly desires. And God will help the God-fearing with an unexpected way out: … And whoever fears God, He will make a way out for him; / and He will provide for him from whence he never expected. And whoever puts his trust in God, He will suffice him. Indeed God fulfils His command. verily God has ordained for everything a measure. (Al-Talaq, 65:2–3)

Then love becomes love for the good, and love for the good is always beneficial to the lover. Indeed, sincerely loving what is good and not loving what is evil leads to Paradise and Salvation. God says: But as for him who feared the stance before his Lord, and forbade the soul from [pursuing] desire, / Paradise will indeed be the abode. (Al-Nazi’at, 79:40–41)