This tiny and beautifully produced book offers a simple yet powerful window into the sublime character of the Prophet Muhammad ﷺ. Originally compiled by the East African scholar Sheikh Al-Amin Ali Mazrui from a variety of hadith collections, the text consists of 130 concise sayings of the Prophet ﷺ. They convey teachings related to character and comportment, in a way that brings the everyday lived practice of the pious Muslim into focus. Some of the gems include: 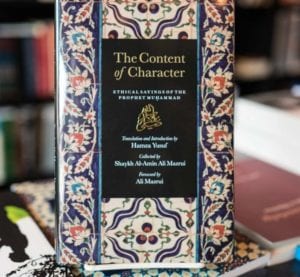 “God loves a servant who when performing a task does so skillfully.”

“Should you become eager to mention another’s faults, recall your own.”

“Whoever does you a favor, repay him; and if you are unable to, then at least pray for him.”

“If a Muslim consoles his brother during some crisis, God will adorn him in garments of grace on the Day of Judgment.”

“A young man never honors an old man due to age but that God sends someone to honor him when he reaches that age.”

The sayings are full of wisdom, inspiration, and light, calling on people to examine their own habits and customs as a means to help them perfect their character.

At Sila, our mission is to help improve social relations not in order to fulfill our own personal rights and desires, but for the intention of seeking the pleasure of Allah alone. This hadith collection is therefore particularly relevant, because the sayings of the Prophet ﷺ contained therein teach us how to selflessly be the best that we can be. Perfecting one’s character is the door for one to live beautifully in this world, and the way to form and maintain the best connections with those among whom we live. The hadiths are enumerated in English translation, with facing Arabic text, allowing us to hear in the Prophet’s ﷺ own words his broader teachings for how we should be with one another.

The book includes a foreword by the internationally acclaimed academic Dr. Ali Mazrui, son of the original compiler. It also has an introduction, notes, and narrator biographies written by Sheikh Hamza Yusuf. The notes are especially helpful for one who is interested in knowing more about the significance of hadith literature, or has questions about its relevance. According to Sheikh Hamza, this collection had an enormous impact in East Africa when it was first published in Swahili in the earlier part of the 20th century. From reading just the sayings alone, it is easy to see why such a collection would inspire believers toward a higher and more perfected personal ethics in the modern world.

TITLE: The Content of Character: Ethical Sayings of the Prophet Muhammad ﷺ