Guiding Children to Their True Purpose

How do I help build a religious focus for my children when the greater society puts so much emphasis on school and career?

One of the greatest of parental duties is to guide children through their childhood into their adulthood and help them ably navigate the decisions that will impact their life. As parents, we are responsible for helping them become upright and capable beings who know how to correctly interact with people in the world, while remembering that the everlasting abode is the true home which they are to prepare for by fulfilling their life’s purpose of worshipping Allah Most High. It is a journey we ourselves are traveling, and we need to help take our children through it as well.

You have a right to be concerned because school and work really are the central concern of many people, such that they struggle to squeeze in the things of real consequence, like religion and family. Parents might think, “religious obligations are only due on my child once he is an adult,” not realizing that adopting a religious focus later in life can be difficult if the seeds were not planted earlier. Once, my husband was invited to talk about salah at the local Muslim Students’ Association chapter. After the talk, a student came up to thank him and added, “Now I need to figure out how to start praying five times a day. I’m a pre-med student because my parents always stressed to me to be a ‘good Muslim’ and have a good job so I can help people. And I’m part of the MSA because I know it’s important to be involved in the community. But I didn’t understand that it was imperative for me to be doing all my prayers, and in their given times.” His parents had misunderstood the priorities and, perhaps without even realizing it, had created a home environment that was focused on education and only nominally on Islam. The parents had clearly done a good job in terms of directing the child educationally, and in instilling within him a general sense of Muslim identity. But the most important thing he needed for ultimate, next-worldly success—to be obedient to Allah’s most basic commands—somehow had fallen to the side. 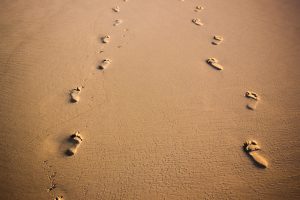 The tendency today is to get children on the school-career track as early as possible. Children pick up quickly on this focus, and what it teaches them is that a person is defined by their career and their outward contributions. On its own, the question that is frequently put forth to children, “What do you want to be when you grow up?,” seems innocent. But combined with the constant social cues they receive as they mature, even such harmless small talk encourages an imbalanced focus on study and career if the emphasis on religion is not made primary. When the children are not even in school yet, they are asked about when they will begin their studies, and once they have begun, their academic progress is diligently charted throughout their formative years. This focus on career culminates in the child achieving what they set out to “be.” But where do they go from there, what higher purpose do they aim for now, when through their whole life they have been conditioned to identify with their career and make it their sole ambition?

As your child gets older, you will be able to guide him or her to a suitable career based on what you both have discovered together of their abilities, talents, strengths and personality. But while children are very young, instead of further encouraging the common idea that a career is the primary identity or life goal, parents should focus on building their children’s identity as Muslims, or those who submit completely to Allah Most High. Servanthood and submission to Allah are critical aspects of being Muslim, and form the core of our identity. To understand how important the trait of being a servant is, we need not look beyond how Allah Most High describes the pinnacle of creation, the Prophet Muhammad sallallahu `alayhi wa sallam. It is this very aspect of his person that He singles out in praise:

“How blessed and divine is He who revealed al-Furqan to His servant…” (Al-Furqan, 25:1).

In the verse above, Allah Most High uses inimitable eloquence to praise Himself with the word tabaraka, and next bestows the name “the Criterion (al-Furqan)” on one of the greatest blessing we have, i.e. the revelation. After this magnanimous introduction, He honors the recipient of this greatest blessing, our Prophet  sallallahu `alayhi wa sallam, with the title of “His servant (`abdihi).”

When mentioning another of His great blessings upon the Prophet Muhammad sallallahu `alayhi wa sallam, that of the Night Ascent, again Allah Most High uses the same trait to describe him:

“How glorious beyond comprehension is He who made His servant (`abdihi) journey by night from al-Masjid al-Haram to al-Masjid al-Aqsa…” (al-Isra’, 17:1).

Our loving Lord Most High uses the same term to describe us when speaking of the final abode we all strive for as the end goal of our worldly existence:

“Lush garden groves of eternity which the Most Merciful has promised His servants (`ibadahu) [for their believing in it while it is] hidden to them…” (Maryam, 19:61).

And when calling us back to him when we have gone in excess against ourselves by sinning, He compassionately calls us, “My servants, (ya `ibadi)” and enjoins us to not despair of the Mercy of Allah, for He is the Most Forgiving, Most Merciful (Al-Zumar, 39:53).

Parents should bring their children, as they mature, to understand the lofty nature of the `abd, the servant of Allah, whose body carries the soul that is destined for an eternal life. We cannot take for granted that our children will know that “being a good Muslim” comes first and foremost in their lives. They should be taught, thoughtfully and purposefully, to strive to be how Allah has asked them to be in all life matters and in whatever professions they end up choosing. He has asked them to be His humble servants, and to fulfill the obligations they have to Him and their fellow servants. The nobility and worth of the person come from this servanthood, and not from a high-earning, high-status profession.  The Prophet sallallahu `alayhi wa sallam said, “How many a disheveled and dusty person—turned away from doors – were he to swear an oath to Allah, He would respond to him” (Muslim), and “Verily Allah does not look at your outer forms nor at your wealth, but He looks at your hearts and your good deeds” (Muslim).

To see oneself primarily as a servant of Allah is contrary to the contemporary trend of identifying oneself through the prowess of one’s intellect and the skill of one’s art. But a career is only one aspect among many of an individual’s life, and young children should be guided to understand this as they mature.  A career is what a person is occupied with for a great portion of his life in order to attain his livelihood within the world of asbab (means) that Allah has created. It is not the person’s primary identity nor the basis of their worth. The idea that one lives for one’s career, or “lives to work,” or spends the greatest and dearest of their blessings[i] in pursuit of this career, is not an idea that is befitting for the Muslim. The upbringing that the parents provide should teach the child that their precious life is not to be conceived of as simply a worker of any given profession, or another outward description of their person, or a characteristic that is applicable to this fleeting world only.

As parents, we cannot help but have our children’s best interests in mind. Thus, it is natural, and right, for us to guide our children to strive for the best in reaching their utmost potential, both in physical and intellectual abilities.  While we guide them to achieve this potential, we remind them that the pursuit is done for the purpose of becoming better, stronger servants who serve their Lord through these blessings. And we remind them that the goal—true servanthood to Allah and obedience to Him—cannot be sacrificed in the pursuit of these worldly means. We should help our children choose work that allows them to earn well so they are not needy, in accordance with the prophetic teaching, “No person ever ate food better than that which was eaten from the earnings of his own hand” (al-Bukhari). We should also remind them that they will have to balance their work with fulfilling the rights of those who are dependent on them, following the prophetic teaching “Each of you is a guardian, and each of you is responsible for his charges” (al-Bukhari and Muslim).

Practically speaking, parents must emulate what they are going to teach their children. A mother or father who does not know their own purpose in life cannot effectively teach their children the purpose of life embodied in the words of Allah Most High, “And I have not created mankind or jinn except that they worship Me.” For example, the tireless father, diligent in organizing all his worldly affairs, but who does not make time to read the Qur’an or pray, or the busy mother, giving and serving wherever needed, but who finds no purpose or contentment in that role, are both missing the point. He cannot draw closer to Allah if he does not set aside any time for it, and she cannot draw closer to Allah if she does not see that mothering is part of the toil and effort required of a true slave of Allah, if done with that intention. In fact, both parents must embody obedience to Allah through fulfilling their own obligations of worship as well as their required family obligations, particularly in their parenting roles, in order to model servanthood correctly for their children. The years will pass by, whether one seeks the akhira and the pleasure of Allah or not, but those that do seek these things will find them, along with their dunya, arranged for them in a way far superior to what they could have managed had they devoted their life to the dunya alone.[ii] We ask Allah to make us true servants of Him, those who are pleased with Him in all of the states He decrees for us, and that He chooses for us and our children adherence to the way of His Beloved Prophet  sallallahu `alayhi wa sallam, who is our model and guide in how to manifest our slavehood to Allah.

References
[i] The Prophet sallallahu `alayhi wa sallam enumerated five blessings—health, time, youth, wealth, and life itself—in the following well-known hadith: Ibn Abbas reported: The Messenger of Allah, peace and blessings be upon him, said, “Take advantage of five before five: your youth before your old age, your health before your illness, your riches before your poverty, your free time before your work, and your life before your death.” (al-Bayhaqi)
[ii] akhira: the everlasting life of the Hereafter; dunya: that which pertains to this worldly life alone

Listen to the Discussion on this Article