Beautifying Oneself in the Home

A well-dressed woman who takes care of her appearance not only appears attractive, but has an aura of composure and femininity about her. The fitrah (natural disposition) and instinctive quality within a woman, in general, is to have concern for her outward appearance. Likewise, Our Creator, Allah ﷻ loves beauty[i] and beautiful character traits. For this reason, we learn from the sunnah of the Messenger of Allah ﷺ to say the following supplication when looking in the mirror:

“O Allah, just as you have made my outward form beautiful, beautify my character.” 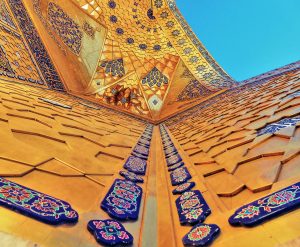 As for specifically beautifying oneself at home for one’s spouse, this is not only a form of worship that pleases Our Lord, but also an act that helps fulfill the need of the husband to feel comfort and attraction towards his wife. Similarly, the husband is also encouraged to have a pleasant appearance for his wife. Living in a society where men and women intermingle freely, it is crucial for spouses to be attracted to each other in order to sustain a loving relationship. One of the ways of facilitating such attraction is to have a pleasant appearance and to exhibit good character.

Although women are exhorted to beautify their appearance at home, the ruling outside the home is the complete opposite, especially in front of those who are non-mahram (men with whom marriage is permissible). However, that should not be understood to mean that women should appear unkempt. Rather what is sought in situations outside the home is simplicity and plainness. Many of the vices one finds in society can be attributed to inappropriate interactions between genders, which are initiated and catalyzed by the lowering of one’s guard through one’s dress and casual interactions with the opposite gender. In order to hinder such behavior while safeguarding women from uncalled-for advances, Allah ﷻ legislated[ii] that women refrain from exposing their beauty to other than their husbands and mahrams (unmarriageable male relatives).

Moreover, in the existence of a healthy, loving relationship, based on Islamic etiquette, both spouses are avid to not only fulfill the emotional and physical needs of each other, but also to appear attractive. However, preferences vary among individuals just as ‘beauty lies in the eye of the beholder’, so one husband might prefer that his wife wear beautiful outfits without any make up, and another may like a wife who follows a “high maintenance” beauty routine. Allowing for a wide spectrum, what a wife is minimally called to in fulfilling her duty to Allah ﷻ is to have a radiant face and wear a clean, decent garment.

As for why women are especially encouraged to beautify for their husbands, one need only reflect on the following guiding words of the Messenger of Allah ﷺ:

Abu Huraira, may Allah be pleased with him, reported: It was said to the Messenger of Allah ﷺ “Which wives are best?” He ﷺ said, “The one who pleases him when he looks at her…”

In a hadith narrated by Umm Salama (Hind the daughter of Abu Umayyah), may Allah be pleased with her; she said: The Messenger of Allah ﷺ said: “A woman who dies while her husband is pleased with her will enter Paradise.”[iv]

Thus, the Messenger of Allah ﷺ is teaching us that a wife who is pleasing to look at, and is cognizant of her husband’s preferences, in addition to fulfilling the commands of her Lord such as prayer and fasting,[v] will enter Paradise. In the end, that is what a woman desires from all her efforts. The final aspiration of a believing woman is to seek the pleasure of Allah ﷻ through all her actions and relationships.